We see that you have javascript disabled. Please enable javascript and refresh the page to continue reading local news. If you feel you have received this message in error, please contact the customer support team at 1-833-248-7801.

Scott Michael Reimer, 60, passed away unexpectedly at home, on Wednesday, September, 14, 2022. Scott was a loving husband to Paula. They shared 17 years of love, 7 years of marriage. He was an incredible father and grandfather.

Born in Richfield, MN. He was the son of Charles ‘Chuck’ & Elizabeth ‘Betty’ Reimer. Scott moved to Bena, MN at the age of 2. He attended Elementary school in Bena. Scott later attended and graduated from Cass Lake-Bena High; where he was voted, ‘Most likely to succeed.’ After the sudden loss of his parents, at the age of 14, Scott was accepted into Johnson/Evinrude’s mechanical training program to keep the family business running. The youngest to attend and graduate. He was later accepted into U of M Crookston and Dunwoody College of Technology. Scott was married to, Janet Teal, for 23 years and together they had three amazing children; Amanda, Matthew & Spencer. Scott owned and operated Reimer’s Marine, in Cass Lake, MN for 32+ years. Where he worked with his sons, brother and close friends that were brothers in heart. Scott was a very active member of several committees, groups, and organizations among his community. He took great pride in all he did within his community. The friendships and comrade gained were life long. Scott enjoyed anything and everything outdoor related. He had a passion for hunting and fishing. Ice fishing was his favorite! He was a true sportsmen. Some of his most meaningful moments, were spent in the woods, or on the many lakes, rivers and waterways. He was also an avid reader and life long learner. Scott enjoyed absorbing history, of all genres. Local history was a favorite. Scott will be known for his forever giving nature and the love he had for everyone. His laugh and smile could be seen and heard throughout a room.

He is preceded into death by his faithful dog Shadow, his parents, grandparents, special uncle and several loving family members.

The funeral service will be held on Friday, September 23 at 1:00 pm. at the St. Charles Catholic Church in Cass Lake. A visitation will be 1 hour prior to the service beginning; at the church.

A celebration of Life will be held immediately following the funeral service at the Pike Bay Town Hall, in Cass Lake. All are welcome to share in Scott’s life. The family would love to hear the many wonderful memories everyone has.

Flowers can be delivered to the Catholic Church prior to services. Cards of love & sympathy can be mailed to Scott’s wife, Paula at PO Box 1028 Cass Lake, MN 56633. 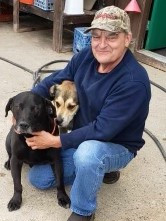