Patricia Zetta Lane was born on November 27, 1917 in Minneapolis, MN, to Donald and Zetta Lane. She grew up with her sister Bernice “Bunny” and her brother Jack. The family lived in several cities in Minnesota and North Dakota before settling in Minneapolis. While growing up she attended various churches as her mother was an organist and her father was a soloist.

Pat graduated from West High School in Minneapolis in 1936. She fell in love with George A. Staehle and they were married on November 10, 1938 at Hennepin Avenue Methodist Church in Minneapolis, MN where they became members.

Pat and George made their home in Minneapolis until he was called to serve in the Coast Guard in the Aleutian Islands during WWII. During the war years, Pat lived with her sister Bunny in Minnetonka, MN.

After the war, Pat and her husband George, who was a home builder and cabinet maker, built a home for themselves in Minnetonka where they raised four children. During this time Pat worked at Methodist Hospital in St. Louis Park, MN, first as a ward secretary and then for 17 years as an office manager for the anesthesiology department.

In the 1940’s, Pat helped her husband build three cabins for their close friends, the Gilman family, on Sandpoint Lake near Minnesota’s boundary waters area. After Pat’s retirement in 1980 they built their own cabin next to their longtime friends. They spent summers at the lake and wintered in Texas for many years. Later they moved in with their daughter Barbara in Virginia, MN. After George passed away in 2001, Pat continued living with her daughter for twenty more years.

Pat loved reading, writing letters, sending birthday cards, crocheting and knitting, playing the piano and organ, traveling, fishing, snowmobiling, volunteering and being a Girl Scout leader. She also enjoyed going out dancing and entertaining. She was a member of Excelsior Methodist Church, Excelsior, MN. for many years. Later she was a member and volunteered at the Crane Lake Chapel in Crane Lake, MN. She was very outgoing with a wonderful sense of humor and could strike up a conversation with just about anyone. She made many, many friends along the way.

Pat lived a rich and full life. Her entire family is so very grateful for the loving care her daughter Barb gave to her parents, especially to her mother all of those years. 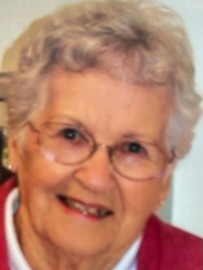