Marilyn (Fenske) Heltzer, 86, passed away peacefully on July 12, 2022 in her apartment at  Ecumen Lakeshore. Ironically, years before she had said to her sister, Maureen, “we will live  there” when they drove by what was then “Lakeshore Lutheran” on their way up the North  Shore.  Marilyn was born to Teckla and Ted Fenske in Morris, Minnesota on June 10, 1936. She  was the second of four children. The family subsequently moved to the St. Anthony Park  neighborhood of St. Paul, where she graduated from Murray High School before attending the  University of Minnesota meeting her husband, Jim Heltzer. Marilyn had a rich life traveling to  many distant lands over the course of their 54-year marriage. They raised their family of 3  children in St. Louis Park. She worked for Minnesota Public Radio starting as the first  Membership Director in its early years, was a producer of Garrison Keillor’s Morning Show and  later became the Vice President of Programming. She moved to Bemidji where Marilyn was the  station manager for MPR in “retirement” in addition to being actively involved in her church and  community activities.

She was a life-long lover of classical music but also the Moody Blues and the Beatles with  eclectic tastes. After moving to Duluth in 2014 she joined two choirs, “Echoes of Peace’ and  later “The Victory Chorus’. She loved to sing. She was a beautiful writer and her columns were  featured in the Minneapolis Star Tribune as well as the Bemidji Pioneer. For several years after  her retirement, Marilyn provided research and ideas to A Prairie Home Companion. She often  said whatever happens in life “makes good material”.

She is survived by her sisters, Margaret  (Charles) Arnason, Maureen (Chester) Saunders; and her 3 children, Kathy Heltzer (Tina  Welsh), Rebecca Heltzer (Cadance Paulaha), and Deborah Heltzer (Howard Walstein); her  granddaughter, Lily Heltzer-Stiles (Christian Kessler). She survived her brother Theodore  Fenske, Jr.  Gifts can be made in her memory to Gloria Dei Lutheran Church or the Victory  Chorus. The family also wants to thank the staff at Ecumen Lakeshore and also St. Luke’s  Hospice for the excellent care they provided to Marilyn.

There will be an informal gathering in Bemidji on Friday, August 26th from 3:30-5:00 at the Diamond Point Park Pavilion. 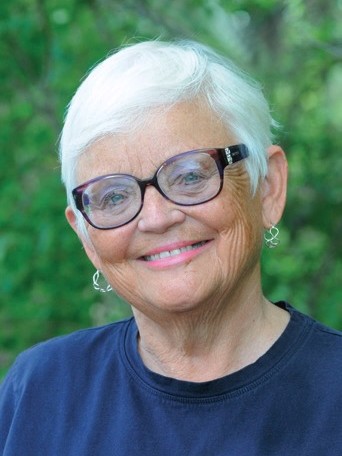